I’m back at work, but I’m not actually working right now. I’ve got a story coming out tomorrow, so be sure to check that out!

Now my job is pretty cool because my boss sends me out to all of these events and my job is to come back with an interesting story. So I did just that last week.

Last Saturday, I attended the North Carolina Maker Faire, which is hosted by NC State University. Maker Fairs are held throughout the country – this was just a “mini” fair, but it was still just as great. The fair allowed makers, crafters and inventors to show visitors their work/inventions.

The grounds were filled with people and cool inventions, like this giant robot. 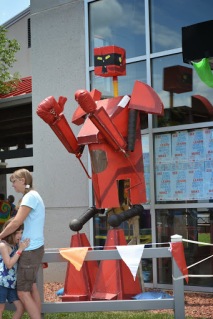 Once you get inside, it is packed. People from all over the state came to enjoy and learn about new technologies and to have a day of fun.

As I was walking around, I got cut off by this little contraption:

Also, this guy was there. I don’t know who he is but his hat.

There were a lot of cool inventions and booths there as well. They even had a robot race.

Now, I was there for the 3D printing. There were tons of booths there that had these printers on display. And they were actually printing!

I came to talk to E-NABLE, an online Google Community with members all over the world. The group works together to create 3D printed hands for people who don’t have one – nothing is more awesome than that.

I got to talk to a mom and her son while they were getting his hand printing during the Faire. Below are some photos of his new hand and of the printer making it. I’ll have their full story out soon, which I’ll link to later.

I also tried to make a video of the printer printing out the thumb Sorry if it is shaky! But seriously, how COOL is this? YAY technology!

The cool thing about this group is that ANYONE interested can join. You don’t have to have a printer – you could be a designer, an engineer, help connect people – anything. If you want to join, visit their website and learn more.

I hope you enjoyed this post – a lot of photos, but how can you not take tons of photos of a 3D printer? What you do all think about this technology? It’s mind blowing that in 2014, we can easily print out body parts and help people in need. Or just make a fun action figure. Let me know in the comments!