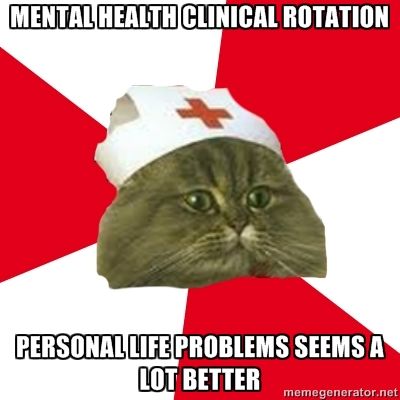 When you get assigned to the Emergency Department with psychiatry, you imagine seeing a lot of individuals with drug overdoses and suicide attempts. What you don’t expect is the horrendously foul (yet ridiculously entertaining) language that comes with the territory. And not from the patients — from the nurses. So here’s Things I Heard in Medical School: Vol. 23!

“He said he became mentally ill when he came to the hospital because they made him drink milk.”

“He was stabbed to death and died, but then he had to go to court so he went as a ghost!”

Nurse: “That kid is only 10 years old but I am scared shitless.” | Doctor: “What did they do?” | Nurse: “Threw a living goldfish at their teacher.”

“She’s over here acting like it is the end of her third year when in reality it is only week 5.”

Doctor: “She asked me if Jesus was my lord and savior.” | Nurse: “You should of told her you were a Jew.”

Me: “We had three patients all before 10 AM. You told me this was an easy rotation.” | Resident: “Hahahaha”

“I’m sure we can find one of those other weird kids lying around and ask them.”

Me: “He literally just walked out of the rehab center and bought more cocaine. RIGHT OUTSIDE the building.” | Resident: “Welcome to Paterson.”

“You need to stop asking so many questions. ”

“I haven’t ruined the sterile field yet, so I guess I’m doing something right.”

“If I don’t show up, they won’t notice I’m not there right?”

“I have a Tyrannosaurus Rex in my backyard!”

“When in doubt, blame the resident.”

Nurse: “Hey look at my thigh gap. | Other nurse: “I’m gonna punch you in the f—ing thigh.”

“She doesn’t have a stroke, but I can give her a f—ing stroke ”

“She tried to commit suicide by eating a handful of melatonin gummies. That ain’t gonna kill you!”

“Oh you got dick pics. So what. Now you’re dic-matized?”

“Oh God that f—ing borderline is here. NOT IT!”

Student: “My patient said she just left her husband because she found out he was cheating on her. With a lesbian. But then the lesbian left him for another guy and now he is heart broken.” | Me: “Someone needs to call Jerry Springer because that is TV gold right there.”

“Anesthesia found out we were skipping so now we actually have an attending. And here I thought I was finally going to be able to sleep.”

“She tried to kill herself by overdosing on birth control pills. At least we know she won’t get pregnant anytime soon.”

Student: “The resident told me to go get her lunch and to not let it get cold. Is that okay for you guys to make us do that?” | Resident: “Yeah, while you are at it, go get mine too.”

“She said she was suicidal. It better not be because she broke up with her boyfriend. | *reads chart* “I f—ing knew it.”

*Patient throws phone at us and tries to escape unit.* | Doctor: “Ok yeah. Your bitch is crazy.”

One thought on “Things I Heard in Medical School: Volume 23”