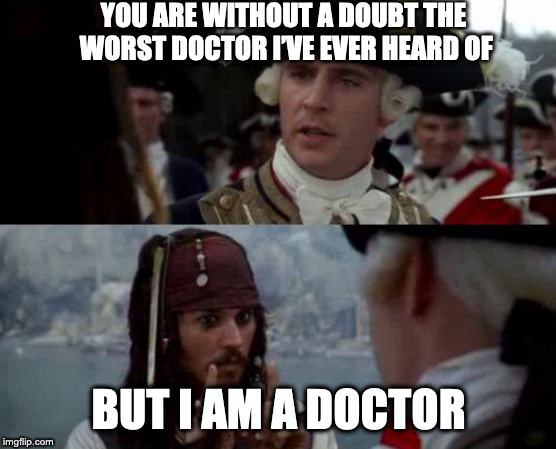 I know I disappeared after starting this new series, but I had a valid reason, I swear. Residency is… a lot. Especially if you are surrounded by the fools I am with! So far I’ve been popping joints back into place in the Emergency Department and trying to figure out the insulin sliding scale over on inpatient medicine. And of course, you can’t forget outpatient clinic. So here’s some quotes that I’ve picked up along the way!

“Oh the patient is completely asymptomatic and wants to go home? And should go home? But you want to admit them anyway? Yeah yeah go ahead and send the patient over. You f–king idiot.”

“Why does he still have his boxers on he was f–king shot in the ass!”

“I love the taste of syphilis. I’d take the chronic syphilis over shingles any day!”

“You know I always forget that we used to drink our own pee at some point. It’s okay. It’s fine. Everyone did it. But don’t drink your pee when you’re in a desert, because you will get dehydrated.”

“My child told me that babies come out of the butt and I just had to say look I’ve had a few and maybe you and your nasty attitude did but the rest did not.”

“We just did the snip snip off the tip tip!”

Resident 1: “I heard you like touching people.” | Resident 2: “Oh no no! I just like touching myself… I was a lonely child growing up.”

“If they come in at 3 months saying that their baby is having a sickle cell crisis…. mehhh no they aren’t. Their hands are just fat.”

Senior: “We’re just ganging up on you today we just like you that much.” | Intern: “I was worried you were going to add another word after gang and then I would have to call HR on y’all.”

“I like to throw out there that we all at some point have had penises. That disrupts a lot of people’s sex lives.”

“Raise your hand if you don’t agree with me and I’ll shoot you.”

Resident: “Did you just look up drugs on a work computer?” | Attending: “No Fs given.”

“Radiologists are too smart for their own good but then they say dumb shit like this. This is why they have to stay in dark rooms alone.”

Senior: “Have I been paying enough attention to you?” | Intern: “No, not at all actually.”

“You don’t want to go in there right now. The boys are talking about their low testosterone levels and are figuring out how to inject things up their you know what.”

Resident 1: “You just have to shove a few pellets up in there and it gets the job done!” | Resident 2: “Wait hold up, you’re shoving pellets up your penis?”

“As a straight white male, I’m feeling very oppressed right now in this group of all girls.”

“What’s the code for a lost adult male? How are we being led by this fool?”